10 steps toward a better future 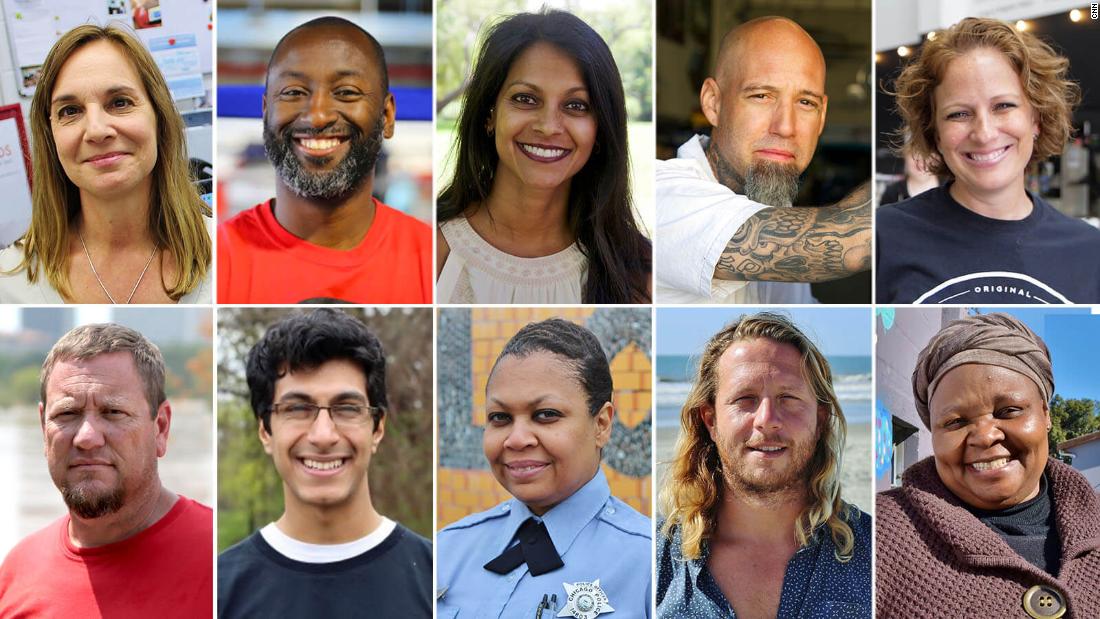 The 11th annual “CNN Heroes: An All-Star Tribute” airs Sunday, December 17 at 8 p.m. ET.
Yet they all share one goal: to improve the lives of those around them.
This year’s top 10 CNN Heroes include an amputee who created her own support network, a cop who empowers the children of Chicago’s South Side, and a determined mother employing dozens of developmentally challenged young adults.

Each of these heroes will receive a $10,000 cash prize. One of the 10 will be named “CNN Hero of the Year” and receive an additional $100,000 for his or her cause.
Their efforts are being highlighted at “CNN Heroes: An All-Star Tribute,” a global broadcast event on CNN airing December 17 at 8 p.m. ABC’s Kelly Ripa will join Anderson Cooper as co-host for this star-studded 11th-annual show, live from New York’s American Museum of Natural History.
Meet the top 10 CNN Heroes of 2017:

Stan Hays, a Grand Champion pitmaster, uses his barbecuing skills to feed people in need.
Since 2011, his nonprofit, Operation BBQ Relief, has prepared almost 1.7 million meals for disaster survivors and first responders — including during recent hurricanes in Texas and Florida.
“Seeing the people working and knowing the impact the meals are making — it can’t help but bring a smile to your face, maybe a tear to your eye,” Hays said.
Learn more about Stan Hays’ work.

Samir Lakhani was a student volunteer in Cambodia when he saw a mother bathing her newborn with laundry soap and realized the bar soap in his own hotel room could make a huge difference.
Lakhani established the Eco-Soap Bank, which now has four soap recycling centers across Cambodia, providing jobs to 35 local women.
“I did not expect to be so effective by such an early age,” Lakhani said. “If you have one part drive and maybe one part naivety or foolishness, you can do anything.”
Learn more about Samir Lakhani’s work.

Having grown up in Chicago’s South Side, police officer Jennifer Maddox still sees a neighborhood rife with challenges.
Maddox’s after-school program Future Ties provides a free, safe space for more than 100 children in grades K-5 to learn, grow and succeed.
“We can’t arrest our way out of this. Law enforcement needs the people in the community to work with us to solve some of the grassroots issues that are causing the violence.”
Learn more about Jennifer Maddox’s work.

Former school teacher Rosie Mashale ran a free daycare from her Cape Town, South Africa, home for 10 years.
But when she was almost ready to retire, Mashale found an orphan on her doorstep and discovered a new calling: to provide care for more than 5,000 orphaned, abandoned or sick children, many of whom have lost parents to AIDS. Her organization, Baphumelele, translates to “we have progressed.”
“Some of them tell me that they want to be social workers; they want to do the work that I’m doing,” Mashale said. “Everybody has got a dream, and my wish is for their dream to be fulfilled.”
Learn more about Rosie Mashale’s work.

Andrew Manzi sought professional help to cope with PTSD and a traumatic brain injury he suffered as a Marine serving two tours in the Iraq War. But it was surfing that helped heal his soul.
Manzi’s nonprofit, Warrior Surf, provides free six-week surf camps for veterans and their families, complete with therapy sessions on the beach.
“You feel safe out there when you know you got a bunch of brothers floating around you,” Manzi said. “We’re just taking a natural approach to healing.”
Learn more about Andrew Manzi’s work.

Leslie Morissette’s son, Graham, was 6 years old when he was diagnosed with leukemia and 8 when he died.
Morissette channeled her grief into the nonprofit Grahamtastic Connection, which provides free computers, iPads and even robots to children battling serious illnesses so they can stay connected to friends, family and their classrooms.
“I find that most seriously ill children just want to be normal kids,” Morissette said. “They want to be in school and they want to be with their classmates. So, we’re providing the tools that enable that.”
Learn more about Leslie Morissette’s work.

Mona Patel was a 17-year-old college student walking to class when a drunken driver crashed into her, smashing her leg and requiring several surgeries and amputations.
Patel created the San Antonio Amputee Foundation, which offers peer support, education and recreation, as well as financial assistance for prosthetic limbs.
“When somebody becomes an amputee, maneuvering through the system is sometimes just scary,” said Patel. “I think the big catalyst of me doing what I do to help the amputee community is because I lived it.”
Learn more about Mona Patel’s work.

Khali Sweeney started the Downtown Boxing Gym Youth Program to help youth avoid the negativity he faced after falling in with the wrong crowd as a kid.
Five days a week, around 100 children hit the Detroit gym for training and academic tutoring. More than 260 students have completed the program. All of them, Sweeney says, have graduated high school, and 98% have gone on to college.
“I don’t see bad kids. I see a kid who hasn’t been heard yet. So, let’s find out what’s really going on,” Sweeney said. “I see the true potential in the kids. “
Learn more about Khali Sweeney’s work.

Facing drugs, jail and homelessness as a teen taught Aaron Valencia that youth need positive examples and projects to occupy their time.
Valencia’s nonprofit, Lost Angels Children’s Project, is an after-school program that focuses on classic car restoration. Low-income, foster and at-risk youth work on a car that is raffled off to support the program.
“It’s a lot more than just teaching kids how to be mechanics,” Valencia said. “We are trying to get them to open their eyes to see a different way.”
Learn more about Aaron Valencia’s work.

When Amy Wright and her husband found out that 70 percent of adults with intellectual and physical disabilities do not have jobs, they were inspired to change that. After all, two of the pair’s four children live with Down syndrome.
Bitty and Beau’s Coffee, Wright’s popular North Carolina coffee shop, is named after their kids and employs 40 people with disabilities.
“Creating this has given people a way to interact with people with disabilities that (they) never had before,” she said. “This is a safe place where people can test the waters and realize how much more alike we are than different.”
Learn more about Amy Wright’s work.
Supporters of each Top 10 CNN Hero can vote every day at CNNHeroes.com by logging in via email or Facebook, as well as on Facebook Messenger by messaging VOTE to the CNN Heroes Facebook page. Vote up to 10 times a day, per method, every day through Tuesday, December 12, at midnight PT.
Each Top 10 Hero will also receive free organizational training from the Annenberg Foundation, a leading supporter of nonprofits worldwide. They will participate in a customized version of the Annenberg Alchemy program, which offers practical guidance to help strengthen organizations for long-term success.
Vote now for your favorite top 10 CNN Hero.